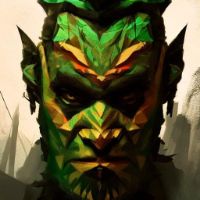 Welcome to the Lizardfolk Name Generator! Use this idea generator to generate thousands of possibilities for lizardfolk names. Have fun!

Are you looking to find the right lizardfolk name for your fantasy character? There are a few things to keep in mind when trying to find the perfect name for your lizardfolk. You need to be careful that you don't get too biased when it comes to the names you choose. This can lead to you coming up with a name that doesn't fit your character.

The Lizardfolk are a unique race of humans that have a very different thought process than most other species in the world. These creatures have a lot of physical characteristics like large bony crests, dark green scales, two mouths, and a nose. They have claws, spears, and small weapons that they use to fight and hunt. In fact, Lizardfolks are one of the most dangerous hunters in roleplaying games.

Lizardfolk are a very cunning and powerful race. They are omnivorous and hunt animals and plants in both land and underwater caves. Typically, they live in small groups of 150. They rarely travel outside their tribe. Those that do are frightened by the prospect of being corrupted by the civilization around them.

There are various ways to come up with a good lizardfolk name. Generally, a lizardfolk's name is long, but short and difficult to pronounce. This can make it hard to choose a name for your character. Some names are created by using historical information or acts of bravery. Other names are inspired by mythology, geography, or other cultures. If you're looking for a lizardfolk name that is specific to your character, you may want to consult a Lizardfolk name generator.

A lizardfolk's personal name is typically given at birth. While it can be very difficult to come up with a unique and memorable name for a Lizardfolk, a Lizardfolk name can help a child learn more about this unique species. It can also be used for story-making.

A lizardfolk name is usually gender-fluid. Males are typically responsible for hunting and leading the tribe while females maintain the lair and camp. Sometimes, males are credited with occupying the roles of shaman or cleric. Depending on the source, male Lizardfolk names are differentiated from females by prefixes and suffixes.

Often, a Lizardfolk's name will describe the tribe as a whole. For example, a group of Lizardfolk living in the jungle may be named the "Jungle tribe." Another group that is located in the swamp may be called the "Swamp tribe."

You can come up with a lizardfolk's unique name by brainstorming. It can take a lot of time and effort to think up a unique lizardfolk name, so you should choose carefully. Using a lizardfolk character name generator can give you thousands of ideas. Alternatively, you can use the handy copy feature.

Lizardfolk are bipedal creatures with a lean build and sharp teeth. These creatures are found in the temperate regions of Faerun. They tend to live in well hidden lairs or under water in caves. The Lizardfolk do not have farming traditions and are prone to raiding nearby humanoids for food. It is rare for a lizardfolk to leave their territory. Generally, a lizardfolk will only attack prey that intends to harm them.

Lizardfolk are incredibly vicious on the battlefield. They will not surrender voluntarily and will keep fighting until the enemy is dead. Occasionally, a lizardfolk may join an adventuring party. However, it is unlikely that an adventurer will find himself facing a lizardfolk in combat.

Unlike most other races, lizardfolk are tetrachromatic, meaning they can see colors within the ultraviolet spectrum. This allows them to distinguish between colors that are identical to others. For example, a human with red eyes and hair would be seen by a lizardfolk as a blond with blue eyes and a grayish coat.

Lizardfolk are organized into tribes. Each tribe has a hatchery where it produces eggs. Lizardfolk are also able to form alliances with other tribes. A lizardfolk will generally only be willing to serve a dragon if it seems to be a good ruler.

One interesting aspect of lizardfolk is that they do not have a fight or flight reflex. Instead, they have an instinctual reaction to their environment that is driven by a need to survive. Often, this instinct will prevent them from engaging in a battle with another creature. If a lizardfolk becomes frightened, it will retreat to its own territory. Similarly, if it is attacked by more than one opponent, it will disengage.

Another notable trait of lizardfolk is their ability to sense emotions. In fact, they are able to simulate the behavior of other races. Unlike other creatures, lizardfolk recognize and understand the feelings and characteristics of objects and situations. When a lizardfolk comes into contact with a magical item, they realize how important it is to protect it. Similarly, if a lizardfolk is confronted by a magical creature, it may have jumbled thoughts and erratic reactions.

While they are capable of recognizing the feelings of other creatures, they do not have a true empathy for them. Because of their brutal homes, lizardfolk do not allow themselves to get sappy or angry. Rather, they focus on doing things that make them happy.

When a lizardfolk lays an egg, it is kept warm until it is hatches. Unlike other creatures, lizardfolk will not copulate with an unwilling partner. Sexual intercourse is a form of pleasure, but the lizardwoman does not desire sex beyond reproduction.

When a lizardfolk attacks, it will strike first with a surprise. During the melee, the lizardfolk will try to defend its life. Occasionally, it will bite its enemy, though this is rarely done. Most of the time, a lizardfolk's attack will be directed at an enemy spellcaster or caster of long-range weapon.

So many ideas, but can I use the lizardfolk names for free?

All random lizardfolk names created with this tool are 100% free to use without any need to provide credit (although we do appreciate the occasional shoutout). Be a little careful though, as there is always a small chance that an idea already belongs to someone else.

Is there a limit to how much I can generate with this random Lizardfolk Name Generator?

There's thousands of lizardfolk names in this Lizardfolk Name Generator, so you won't need to be worried that we'll run out anytime soon. Just have fun with it.

For even more ideas and some additional options, be sure to also check out the Lizardfolk Name Generator over on The Story Shack.