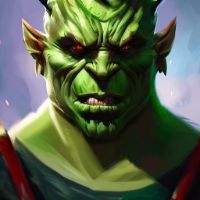 Welcome to the Orc Name Generator! Use this idea generator to generate thousands of possibilities for orc names. Have fun!

Choosing the perfect name for your orc is a big deal. The right one can make your character stand out among the crowd. If your characters aren't memorable, you're going to have a hard time keeping your players entertained.

Orcs are a large, muscular race of humanoids with a deep religious background. They live in tribes based on region. Each tribe has a unique name and a last name, with the last name being the name of the tribe. These names are typically simple and violent.

Some orcs worship the gods of death and fear. Their holy symbol is a white outstretched hand. Others may pray to other orc gods from time to time.

The Orcish society is still a patriarchal one. Chieftains rule over their kin, and their wives protect the spirit of their clan. Women serve as guards, healers, and warriors. Most of the women in strongholds are the daughters of the chieftains.

Orcs tend to be savage and can be cruel. But they also consider themselves fair. They have no written language, but they communicate through symbols. Often, they use horns and drums in raids. Unlike humans, they are also cannibalistic.

Orcs have several religious orders. One of them is dedicated to the goddess Malacath. The other is to the god Trinimac. Both religions are based on the Code of Malacath. Those who break the rules are required to pay the Blood Price.

Orcs have a history of waging war against other civilized races. Rothnog was once a great orc-nation. However, the Dark Conquest occurred after the cunning Dweller in the Vale. Despite this, the orcs still maintain a stable nature worship.

Orcs are also a cannibalistic race. They eat insects and animals. They are usually very tall, although not as tall as a human. They can live up to 50 years. It's not uncommon for them to slay their own male offspring.

A key tenet of the Orcish religion is the Code of Malacath. All orcs receive guidance from their ancestors. During battle, the orcs hear the voices of their ancestors. There are also a few religious paths the orcs follow.

Most orcs have a sacred duty to their tribe and their gods. During the coming of age ritual, a young orc must defeat an older warrior. This marks a key turning point in their life.

Orcs are bellicose humanoids that live in the wild and often in isolated tribes. They are a very primitive race and their appearance can vary widely. However, their physical characteristics are similar to humans.

Orcs are medium-sized creatures, with an average height of about 6 feet. They are usually muscular. They have a base walking speed of 30 feet, and can see in total darkness. Some orcs have pig-like faces and snouts. Male orcs have large, jutting jaws and fangs. Female orcs are generally smaller.

Orcs are not a race with a good reputation. In fact, they have been warred against by other races. And they do not easily trust outsiders. To gain their acceptance, outsiders must work with the orcs to form a relationship. The orcs are highly territorial and aggressive.

While Orcs are sometimes referred to as goblins, they are not a specific race. Their appearance is often based on their ancestry. A half orc, for instance, is named by the race that raised the half-orc. This means that there are many different kinds of half-orcs.

Half-orcs are usually characterized by a thick facial structure. Some have a human nose, while others have a pronounced brow. Typically, their hair is dark.

Most orcs have tusks. This is a holdover from their pig-like appearance. But orcs also have claws. Other orcs have razor-sharp teeth. Unlike other races, orcs often have short pointed ears.

When they are young, orcs are forced to develop their physique. As an adult, an orc weighs roughly 230 to 280 pounds. It takes around 40 to 50 years for an orc to mature.

Orcs live in a society that is patriarchal. The women of the Orcish society are treated as property. These women are expected to fight to the same level as men.

Many authors depict orcs as humanoid creatures with fangs and yellow eyes. However, Tolkien's concept of orcs is much more gruesome and uglier.

In modern fiction, there are two types of orcs. There are the Great Orcs, who are captains in orcish armies. They are also the most powerful of the orcs. They can become spellcasters.

Orcs are massive, muscular humanoids. They are powerful warriors, capable of destroying almost any foe. But they also possess strong religious beliefs. Most orcs are followers of Gruumsh, the one-eyed god of war and storms. And they also worship Malzot, the orc god of mountains and caverns. These two are the only gods given dedicated worship by most orcs. However, there are other orc gods who receive occasional prayers and sacrifices. This mix-and-match pantheon could be a newer Orcish pantheon, or it might have originated from the interactions between orcs and other races.

A great druidic tradition arose in the Eldeen Reaches during -4,100 YK. Its origins are unclear, but a black dragon named Vvaraak taught orc druids the secrets of nature. Some believe the dragons taught druids how to seal the gates of other planes.

Druidism is a recurring theme in Eberron. The drow in Xen'drik, the lizardfolk of Q'barra, and the fey in the Thelanis all hold ancient druid traditions. One of the most extreme druid orders is the Ashbound. Their primary focus is the preservation of the wilderness, but they are also defenders of nature against outsiders.

Another major druidic tradition on Khorvaire is the Wardens of the Wood. Members of this order defend the lands and work with ranchers and farmers to promote prosperity. During the Last War, the Wardens became the de facto governing body of the Eldeen Reaches.

Finally, there are some other Orcish Gods, such as Shargaas, the god of disease and death. These orcish deities may also be a part of a mix-and-match pantheon, but their dedicated worship is still rare.

Despite their differences in religion, orcs all have one thing in common: they are fiercely loyal to their god. Many orcs are war-like, and they will fight with others to defeat a common threat. Often, these orcs will change their names. Typically, this will happen when they become outcasts or have a fantastic battle performance.

Although they have no common language, orcs use a short, guttural form to convey their messages. They are quick-worded and focused on survival.

If you're a fan of fantasy fiction, then you've most likely encountered the monster known as an orc. These creatures are large, muscular humanoids with green skin and tusklike teeth. They are often depicted as brutish, savage and irredeemable. But their appearance isn't all they are.

Orcs are a type of creature that is part of a race akin to elves and goblins. The Orcs are an illustrious villain, but they are also an iconic figure in the world of fantasy.

Orcs are a brutal humanoid species, with a proclivity for violence and bloodshed. Though orcs are usually portrayed as savages, their nature rewards them with strength and endurance. A lone orc may not survive for long, and most orc tribes are less than a hundred members.

An orc's first name is not normally taken, but it is common for orcs to take the name of a member of their tribe. This is done for several reasons. First, orcs are known for being fierce fighters and their tribes want to protect their strong warriors from other tribes. Second, orcs are sometimes treated as outcasts, so they might change their name to fit. In many cases, orcs are given epithets during battle.

Some orc names are quite short and simple, while others are long and guttural. The names are often corrupted from Elvish words. Most orcs use hard consonants to make their sounds.

The most popular orc name generators are focused on Tolkien's orcs. While they can be used for gaming characters, they are not necessarily the most appropriate. For example, a slave orc might be better suited to a name with a stronger sound.

However, the Orcs' names and culture are also found in other fictional works. For instance, in the Eberron series, orcs are referred to as druidic orcs.

Orcs are a mythical creature that originated from a corrupted race of elves. Tolkien wrote about orcs in his classic novel, The Lord of the Rings. Since then, they have appeared in numerous other works of fantasy fiction.

In addition to Tolkien's work, orcs have been featured in various video games and role playing games. Their popularity is primarily tied to the fact that they're considered a quintessential bad guy in fantasy fiction.

So many ideas, but can I use the orc names for free?

All random orc names created with this tool are 100% free to use without any need to provide credit (although we do appreciate the occasional shoutout). Be a little careful though, as there is always a small chance that an idea already belongs to someone else.

Is there a limit to how much I can generate with this random Orc Name Generator?

There's thousands of orc names in this Orc Name Generator, so you won't need to be worried that we'll run out anytime soon. Just have fun with it.

For even more ideas and some additional options, be sure to also check out the Orc Name Generator over on The Story Shack.